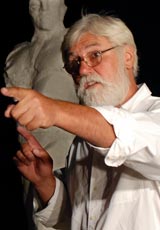 Eclectic and historical Radovan Trnavac’s paintings are despite their apparent discord from many contemporary paintings, evidence of compatibilities of tradition and the new, painterly skill and nonchalance, real and surreal. Mića’s paintings are extremely well painted. They offer a special kind of “more is more” which translates the heritage of the past into a statement for the present.

Mića’s work is a mature vision meant for adults. Mića is a thinking person’s artist. These paintings while immediately attractive for their playfulness and colour ultimately hold easy to understand. Common themes and consistent symbols occur to us only after repeated viewing. With each look we are drawn further into the relationships of the objects so that we become an intellectual participant, appreciating each painting more as we see it more. 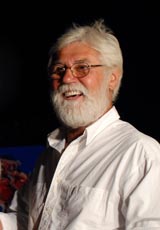 Besides his more obvious debt to Surrealism there are affinities with Cubism and Dada … For him the world would be meaningless were it not for men’s presence; he is both creator and destroyer, genius of invention and architect of absurdity. Outside of man presence the world of nature has no place in these paintings. Trnavac’s paintings are provocative, powerful and meaningful. Power lies not in any grand statement but in their poetic vision and, as in all good poetry, their meaning is revealed gradually.

Skillfully and wisely, with a universal knowledge, Mića has a feeling for the past and presents it to us today with, however, a message for the future as work of the 21st century. He is an exceptional master of the brush, colour and is acquainted to perfection with human anatomy and the ray of light which touches us wonderfully. 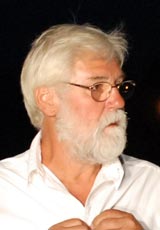 Today we are daily confronted by offering answer, without a question. This comforting beauty art may have its place, I do not know. But what is art that raises question, period? It is the latter quality that makes the recent works of Mića-born Radovan Trnavac-so compelling, so dangerous. Mića’s self-conscious, deeply felt supranational and responsiveness to universals expressed his salvation. For us, Radovan Trnavac Mića’s work is a catalyst spurring an inner search. Mića intuits that merely suggesting malaise in our time by means of art is more real than the ego-controlled illusion we call the reality of which we so often speak, but do not heed: that in the end we will do what is right. We will find our own answers. In the end, Radovan Trnavac Mića’s optimism is justified.

According to such accomplished art works, as well as to the entirety of acting within Serbian culture and art during the last three decades of 20th century, we can, very responsibly, make a conclusion that Radovan Trnavac Mića has already left a deep and indelible trail.

Official opening of the exhibition of paintings and objects by Radovan Trnavac Mića
”The Sense of the Soul is Thought, and I paint what I Think”

– The exhibition was opened by Professor Ratko Božović, who was a professor of Sociology of Art during the 70s at the University of Fine Arts in Belgrade. So, Mića was fortunate for Božović to be his professor. At the opening the Professor said:

”Mića Trnavac differed with joviality, speed and I noticed that he has been incorporated into modern times and that he will become a miracle! And we have got the miracle! Therefore, he belongs to those who are searching for themselves and who found themselves. Many were searching for inner self and they lost it. A poet would say, “I suffered the loss in a personal quest of myself”. This is not the case with Trnavac.

In a way, I followed all of his shows. I read more about it than I was personally present. More than thirty solo exhibitions… Believe me I have never met so many compliments. I am sometimes scared of compliments. Sometimes compliments are a part of lobbying, affection or some sort of one-way poetics or aesthetics. Then the question remains whether certain compliments are adequate. I must openly say right here right now that they were not wrong! Not those in Canada, nor those in America or even those in Valjevo, where Trnavac opened International Art Studio. And I have to say that there are few people who wherever they come they change things and also change things in themselves.

I noticed that our Mića Trnavac is searching for the perfect picture, the one picture where nothing more can be added or subtracted. However, it is important to me that he is on a constant rise. He does not stop. I saw that his drawings are fantastic; I saw that his green-blue color is adequate but I have seen also that he and knows how to reduce it, knows how to reduce it to one measure that is adequate compared to what is, if you like, an opinion about the painting.

He is being compared with a classic, with the greatest artists of the world. I counted somewhere that about 50 artists are in some way correlated with our Mića Trnavac Fifty of them who belong to dream tem, who represent the highest elevation point, who belong to permanent values.

Mića Trnavac establishes continuity with the most valuable painting ever since to this day. He is the one who knows what’s going on in the painting, so he is not an artist who does not know what was before. In this sense, his art is actually a continuation. It is no coincidence that figurative painting is present in his art. So, it`s surrealism and it’s realism. It is what our time is. Not as a determinant which is defined by the artist, but the artist is pulsed zeitgeist. And if by chance we are all gone and some people came to recognize this time, they would say: Well, this is the artist who stated his thoughts and finally painted those times”