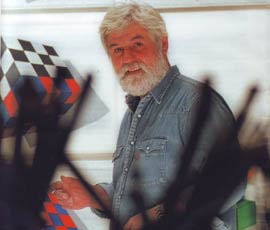 Radovan Trnavac was born in 1950 in Kragujevac. He grew up in Valjevo, where he developed his talent and love for art. Having become an artist after graduating at the Academy of Art, Trnavac nourished his talent by making 26 documentary films on his colleagues. He also won a number of awards for his paintings and sculptures while he was still very young. Radovan Trnavac has made a living as an artist since the age of 20.

Back in 1970, Trnavac found the right life approach and the most efficient way to tackle its problems. He perceived its strength and exploited them to stride further and higher, towards new shapes, new paintings and new opportunities to touch the rainbow.

He has had 33 solo exhibitions in former big Yugoslavia (SFRJ), Serbia, Macedonia, Italy, Switzerland, Poland, the United States and a number of other countries. He also had more than 700 group exhibitions all over the world.

Trnavac is like a sailor at sea in his art. He is inseparably tied to his work, but also very restrained in his judgments and predictions. He is cautious and isn’t trying to be bigger than he is. This kind of wise and talented modesty, combined with genuine confidence, is a virtue typical only for seamen and the above-mentioned painter.

He picks and chooses his expressions, colors and forms. His perceptions and expressions are close to ours. He is hard working painter and very dedicated to his work. He thrives on his paints in black, blue and green, but encourages people to change it for the better.

“I want to believe that one day there will be no homeless and hungry people, especially no hungry children”.

Trnavac is strong and lively. He is versatile and colorful, always full of surprises, but most of all firmly committed to himself and his work. He is engaged to each and every one of his paintings and therefore to the reputation he enjoys.

He has been living in New York since 1981. Many of his paintings are exhibited in museums and galleries in New York, Germany, Switzerland, Poland, France, Holland, Japan, Macedonia and former Yugoslavia. 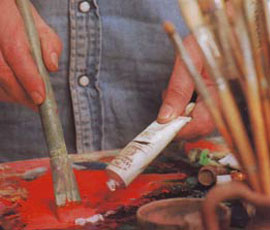 “The artist’s move from Belgrade to New York reflected in his paintings. The overall mood has shifted from tortured anguish to cautious optimism. Objects are allowed to float freely in space heightening the surrealistic drama and creating a dialectic relation between concrete imagery and formal abstraction. These paintings by Radovan Trnavac are provocative, powerful and meaningful. The power lies not in any grand statement but in their poetic vision and as all good poetry, their meaning is revealed”

In his paintings we can see that long and hard journeys have the good side too. They rescue us from the primitive judgements, cheap expressions and reflexions. He achieved the power of duration. His paintings hide Fenix inside. With every painting, sculpture, exhibition and award, with every new project, he reaffirms himself. On the other hand he wathes us, impounds and learns.

“Today we are daily confronted by offering answer, without question. This comforting beauty art may have its place, I do not know. But what is art that raises question, period? It is the latter quality that makes the recent works of Mića born Radovan Trnavac so compelling, so dangerous. Mića’s self-conscious, deeply-felt supranational and responsiveness to universals expressed his salvation. For us, Radovan Trnavac Mića’s work is a catalyst spurring an inner search; a dialogue between our primitive self, with its reflexive, socially-conditioned response to divisive symbols; flags, crucifix, Star of David; and our higher, compassionate human being, that, at some level perhaps unconscious permits us to experience kinship with and compassion for fellow man, to care about the state and fate of our planet. Through his bush he conveys his confidence in us. Mića intuits that merely suggesting malaise in our time by means of art is more real than the ego-controlled illusion we call the reality of which we so often speak, but do not heed: that, in the end, we will do what is right. We will find our own answers. In the end, Radovan Trnavac Mića’s optimism is justified.”

His native country is a ray of sunlight to him. He has seen many cities and countries. He has traveled and painted at the same time, in air and at sea. He has learned what the world can offer. He has learned about other living beings, seas, mountains, people, settlements, customs, languages and coexistence between man and nature …

“I believe in nature and its laws. I think there is no justification for destroying nature and killing animals. That is modern mankind’s unforgivable sin …”

He is a man of many talents. He gives all he has with every stroke of the brush when he paints, which is why he has become a source of ideas.

Radovan Trnavac Mića lives in New York, so far and yet so near. He dedicates every spring to us. He knows how to love and has the will to strive for our culture and our future. He wants to transform us into colorful, talented and stunningly beautiful people.

His paintings show that it would be easy to create heaven on earth for artists of his likes. He has access to each and every road and all the doors of life are open to him.

Wishing to return his kindness, the town of Valjevo has founded the International Art Studio “Radovan Trnavac Mića”.

“Those who seek happiness in the happiness of as many people they communicate with as possible, have the best chance of finding it …”

Radovan Trnavac Mića is an artist who knows that love is a law above all others. He knows that reputation is earned by hard work. One who works hard may not be loved but is always respected. The world is where Mića decides to create …